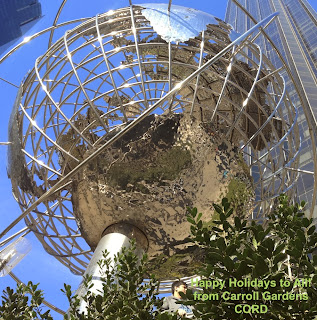 The Gowanus Canal Community Advisory Group/CAG held its last meeting of the 2013 year last Tuesday night 11/19/2013 at St Mary Star of the Sea Houses.  Attended by many CAG members as well as several community residents and stakeholders, last night's meeting brought us an update from EPA Project Manager, Chistos Tsiamis,  EPA Community Coordinator, Natalie Loney and recently returned Archaeology Expert, John Vetter.
Christos informed the group that he had met with all of the Responsible Parties post ROD (Record of Decision) to insure that each of them understood what was required of them now that the ROD is actually, law. A letter was sent to each of them detailing what steps are required for them to take between now and October, 2014.  A copy of that letter can be found http://www.epa.gov/region2/superfund/npl/gowanus/
Christos indicated that New York City has already expressed an interest in an additional meeting with the Project Manager to review procedures, etc. A date will be set.  EPA is in talks with the property owners at the mouth of the canal regarding restoration and repair of the bulkheads--although not specifically part of the ROD, the bulkheads can present a recontaminating influence so discussion must be part of the process and taken into consideration as  part of the eventual design.
EPA will also be launching a pilot study on possible methods of mixing some of the removed contaminated material with cement as a means of stabilizing and reusing some of that material in a more positive, less costly manner.  The EPA is scheduled to meet with Lightstone (the current owners and developers of the former, Toll Brothers site) today, regarding the EPA's requirements, post ROD on storm water, the additional sewage the project is expected to produce and further discussion on the exact nature of the contamination on the site.
John Vetter, now working as a sub contractor for EPA is back on a limited basis to pick up the Archaeology segment of the Canal. He reminded us all of the terrific nature of the ROD as a document that both defines specifically the authority of the EPA as well as providing archaeological protection for the historic nature of the canal site itself.  He reminds us that the ROD is important reading for each member of this community. http://www.epa.gov/region2/superfund/npl/gowanus/


John has also asked for the input of the community regarding your feelings on what is important to YOU historically and archaeologically about the canal. This input will provide a road map for the Archaeology Committee to pursue.  This was the last meeting for 2013. The CAG will begin monthly meetings again on the fourth Tuesday of each month in January.


Happy Holidays to All!!