A POO POO Tsunami hits the the Gowanus Canal and other crappy news. 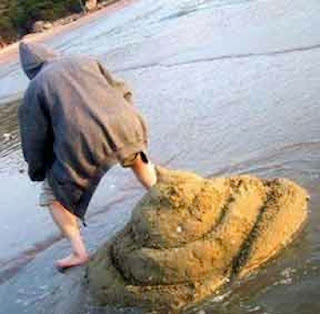 Q. How much potentially infectious POO POO is in the Gowanus Canal?
A. In two words: A LOT!
More POO POO (a.k.a. raw sewage) than most of us ever want to know about.

In fact you can see a video of what is fondly called "The Gowanus Canal Poo Poo Tsunami Number Two" in Carroll Gardens/Gowanus right here:
http://www.doobybrain.com/2010/09/27/video-of-raw-sewage-spilling-into-the-gowanus-canal/  But only watch it if you have a strong stomach and did not just eat.


In fact, the Gowanus Canal has the highest level of sewage of all the NYC waterways combined INCLUDING the Superfund designated Newtown Creek.  (See chart below*).

This water should never be touched with bare hands ESPECIALLY NOT after a hurricane like the one we just had, Sandy.  Even the NYC Department of Health previously warned our community not to drink it;  not to swallow it;  not to swim in it;  not to fish in it;  not to eat the fish from it;  and to take "proper precautions" in case we have touched it, gotten it in our eyes; etc.

Is SEWAGE dangerous to humans?  In another word:  YES.
Sewage carries bacteria and viruses that can make humans very sick.  This is bad news for our community, both residents and businesses along the Gowanus Canal, especially after a major flooding of the Gowanus Canal like we just experienced.

"What are the risks associated with the discharge of raw sewage?

Raw sewage can carry a variety of human bacteria and viruses.  Depending on the amount and concentration of the sewage and on how people are exposed to it, these bacteria and viruses can cause illness. Combined sewer overflows (CSO's) also contain a variety of chemicals, oils and other wastes picked up by stormwater as it flows across parking lots, roads, lawns and other surfaces. Most combined sewer overflows occur during rain and are therefore diluted by rain and river water, but the potential for health and environmental hazards is still present. People most likely to be affected are water skiers, swimmers and others involved in water sports."
http://water.ky.gov/permitting/Pages/CSOQuestions.aspx

"Most waterborne disease-causing microorganisms come from human and animal fecal waste. A small drop of fecal matter can contain millions of microorganisms of many types, some of which are disease-causing pathogens. Exposure to the microbial pathogens found in sewage can lead to short-term and chronic illnesses."
"The most common types of waterborne illnesses are short-term gastrointestinal infections that cause stomachaches and/or diarrhea. The elderly, children, pregnant women, and people with compromised immune systems are at greater risk of contracting chronic illnesses from sewage-contaminated water."
"A survey by the Center for Disease Control reported over 4,000 documented illnesses from recreational waters in the U.S. in 2005-2006. However this number is assumed to be low because waterborne illnesses are notoriously underreported. People often associate the most common ailments, stomach and digestive system problems, with what they ate for lunch instead of contact with water. Still, reports of illness resulting from swimming are on the rise."
http://www.riverkeeper.org/water-quality/hudson/waterborne-illnesses/

* "Riverkeeper, New York's clean water advocate, was out last Friday, November 2nd, to sample the waters after Hurricane Sandy. They just published the results of these tests. They show that the Gowanus Canal had the highest sewage level by far. Though we all know that Combined Sewer Overflow (CSO's) is dumped into the canal during heavy rains, it is important to note that Hurricane Sandy, though destructive, was not a significant rain event. In comparison to the Gowanus findings after the storm, even Newtown Creek's numbers came in fairly low.  Riverkeeper will be out again on Friday, November 9th to take additional samples."  PMFA
http://pardonmeforasking.blogspot.com/2012/11/results-from-riverkeepers-new-york.html

*Sewage contamination levels at 6 of our standard sampling sites on 11/2/12
Q.

Did you know the City of NY does NOT want to clean the water of the Gowanus Canal, only the sediment?