Mayor Bloomberg and Deputy Mayor Cas Holloway say a whole lot of NOTHING re: Gowanus Canal Flooding and A Very Anxious Mother writes to CORD 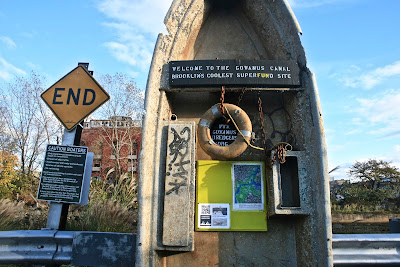 Cas Holloway and Mayor Bloomberg have said a whole lot of NOTHING in their response to the environmental situation caused by the Superfunded Gowanus Canal flooding during Hurricane Sandy last Monday.  "Not to worry your little Brooklyn heads off heads off folks!" pretty much sums up their non-response to our disaster. LINK

At a press conference after Hurricane Sandy, Mayor Bloomberg and Deputy Mayor for Operations Cas Holloway seemed flippant about the dangers associated with the health risks from Gowanus flood waters. When asked about the health risks related to the toxic water
http://politicker.com/2012/10/gowanus-canal-flood-risks-bloomberg/, Cas Holloway, who is more familiar to the Gowanus community as the former head of NYC's Department Of Environmental Protection (DEP) and, along with Mayor Bloomberg, a vocal opponent of the Superfund designation for the canal stated: "We’ll make sure that–we don’t think there’s any immediate danger to anybody and we don’t think there’s any issue.” LINK
http://pardonmeforasking.blogspot.com/2012/11/gowanus-business-owners-concerned-about.html

Does this sound like an appropriate response to our situation?  We are living in the toxic flood aftermath of a EPA designated Superfund site right here in Brooklyn.  We had a flood of five feet of highly contaminated Gowanus Canal water during Hurricane Sandy and toxic sludge has been left behind with highly dangerous chemicals including oil, PCB's, coal tar wastes, E coli, gonorrhea, heavy metals, and raw sewage. This is one of the most contaminated waterways in America:  an open sewer in the heart of a densely populated neighborhood directly across from Wall Street. Here is a link to a video showing the damage and sludge left behind after the storm.
http://canalcreatures.tumblr.com/post/34918845095/hurricane-sandy-toxic-flood-a-tour-of-our-office 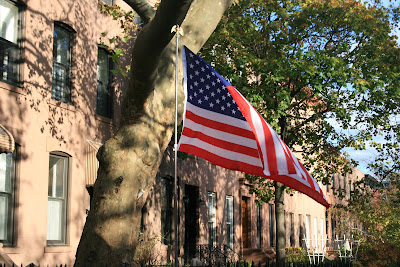 Flag flies today on Second Street c. Triada Samaras
We feel a much more appropriate response from those we elected to be in charge and to spend our tax dollars and represent us would have been to warn people living or walking anywhere near the Superfunded Gowanus Canal flood waters:  to avoid having any contact with both these dangerous flood waters and the debris brought in by the flood. A public warning and a public plan would have provided much needed information to the Carroll Gardens/Gowanus residents on how to manage in the Gowanus Canal area after Hurricane Sandy.

Where were the warnings to the people in our neighborhood?  Where were the cleaning crews to scrub up the areas where there was toxic canal sludge spewed up from the Gowanus?  Why were the City’s several environmental  agencies so silent?   And if these city agencies did plan to do something after Hurricane Sandy shouldn't the community have been made aware of what plans they had for our community? 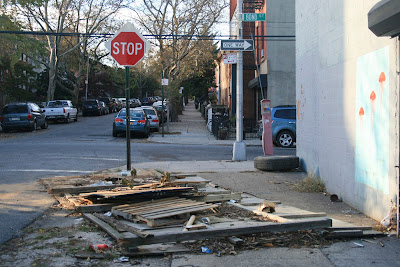 And, even if there is a more through addressing of the combined sewar overflow (CSO's) as per the Gowanus CAG/Citizen Advisory Group's resolution calling for a FULL clean-up of the Gowanus Canal, including the CSO's, the Canal will still be at risk for flooding in the future as Hurricane Sandy has shown us.  It is no secret that the Gowanus Canal Corridors are designated: Zone A, or a floodplain as defined by NYC.

Meanwhile an anxious mother living in New England, miles away from the Gowanus Canal, seems to have a better grasp of the situation than either Deputy Mayor Calloway or Mayor Bloomberg.  Below she writes in to CORD, expressing her worry about her daughter, who lives in the Gowanus Canal  area:

I am so sorry for the Superfunded Canal flooding into in your neighborhood.  Thank God you people are trying to stay on top of this.  I do not know how much you can do to get the people in charge to come put there.  You need to have someone in charge to comedown there and test and to alert  people how dangerous it is for everyone!

You have to be sure people  that live in the area  know what is going on  and you people have to get this in the newspaper and on the news!!!  Hopefully, somehow you get attention immediately!  I would even go so far and get money and put an add in the N.Y. Times.  There a lot of wealthy people there. You might get attention from the authorities!

I feel awful for all of all of you. And especially for you and all the others who have been working so hard on this canal issue flooding issue. It has to be so frustrating for all of you all.  Feel very sorry and scared for all of you.  Shame on the authorities for shutting their eyes and not  listening to you all and not CARING!

Let me know what happens.
Sending many hugs,
XXXX’s Mom

And this just In From Councilman Lander’s Office:

Hi everyone,
As you may have seen on Councilmember Lander's twitter feed, technical teams from the U.S. Environmental Protection Agency have just arrived at the Gowanus Canal to assess damage and any environmental impacts of Hurricane Sandy. They will also be distributing copies of the attached flyers.

The team is now at the north end of the canal and will be walking south over the next hour or so. We will send out updates over twitter and facebook as we receive them.