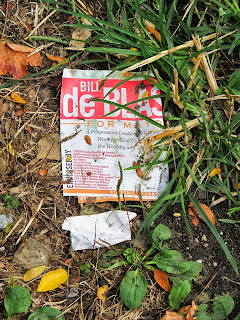 Our affair with Bill DeBlasio began sometime in 1999 when he became our School Board Representative.

We were attracted to his drive, his enthusiam and yes, even his ambition. He flirted with us--we responded.

The marriage was consummated when we elected him our Council Member in 2001. He married each of us...all of the men, women and children of District 39.

He appeared to be quite the catch---well-spoken, attentive, an engaged conversationalist who seemed to listen with every fiber of his being. He was tall, handsome, charming---He was a Democratic representative in a Democratic demographic--he had ties with a former President and was an advisor to a potential one---The honeymoon had begun. We were willingly seduced and felt very lucky.

We were unaware then, that we did not even know his real name.
It was not long before we learned that his style of representation was very different to what we had become accustomed to. He was not readily available by phone--he was rarely in his office and there were intermediaries that we were told to deal with instead of him.
It seemed like he was never home.

This was a very different type of commitment---one this corner of the 39th had  certainly never seen before.

Four years into our relationship, we renewed our vows, but it became clear that Bill had set his sights on much greener, much larger pastures. All of the signs were there and of course, conflicts arose.

Developers seemed to be targetting our community. High rise, out of context apartment buildings tearing the fabric of our historic brownstone neighborhood--changing our surroundings faster than our infrastructure or current environment could possibly accommodate.

What did our Champion DeBlasio do?

He turned his back on us and opened his arms to a developer who had grand plans for a project that presented very real environmental concerns.

Then, in April of 2009, the filthy Gowanus Canal was miraculously nominated to the National Priorities List--an event that any faithful partner would have cheered....instead
Our Bill declared that the Canal "was not that dirty" and proceeded to support the New York City Plan which scoffed at the facts and scientific findings of the EPA.

Perhaps if this had been the last of our disappointments, our relationship and inevitable parting could have been more pleasant. He was now the certain Public Advocate to Be and he had more than one foot out the door.

But his final farewell, the last straw came when we learned that he very very quietly tried to push through a law which would exempt a project which was in direct contradiction to a hard earned zoning amendment he had publicly supported and widely claimed to take credit for!
Bill moved on to his Public Advocate position--where his tenure left us, to put it politely, unsatisfied. The EPA vs the City of New York battle raged over the Gowanus Canal's future, and our Bill, our neighbor, our former partner and most importantly,  OUR PUBLIC ADVOCATE, had not one word to say about the environmental/public health hazard coursing through the heart of his former district.

Throwing his hat into the Mayoral race at the end of the Public Advocate gig, was not a surprise. We did find him predictable and ever self serving.

It may come as a surprise to you that Bill can deride the worst landords in New York City on one hand and accept their money with the other...but it does not surprise us.
One day Charter Schools must go--next day--they can stay if they pay rent--next day they won't be pushed out if they can't pay......all too familiar to us.

Bill tells a tale of two cities combined with the I am Robin Hood stance. It is a catchy platform--who would not fall in love iwth someone who professes to better the lives of the poor, champion the underserved and better educate our children while taxing the rich?
However, this same Robin Hood, this same equalizer, this former partner of ours has also publicly characterized himself both a progressive and a fiscal conservative. We suppose it depends on who is in the audience at the time.

It seems as though Bill is counting on the fact that New York is still a Democratic city--and what he says will not really be measured or remembered.

Published jointly by CORD and Pardon Me for Asking

We encourage all of our District 39 neighbors to send your comments and/or your Bill DeBlasio experiences to cgcord@gmail.com.
If you would like your comments published, please give us express permission in your email to do so.
Posted by Triada Samaras at 12:19 AM