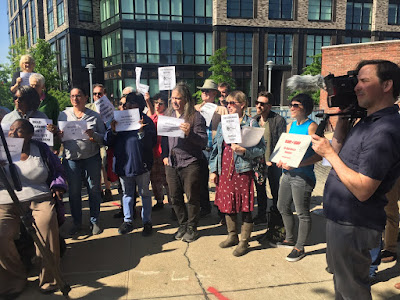 "Voice of Gowanus" members held a press conference on the Carroll Street Bridge
this morning.

This morning, CG CORD joined our Gowanus area neighbors on the Carroll Street Bridge to hold a press conference to express our enormous concerns about the proposed rezoning of the Gowanus neighborhood, which will bring an estimated 20,000 new residents to the area.

With one voice, we urged our City and our elected officials to "complete the environmental remediation of the Gowanus Canal first, address the Combined Sewer Overflow issue, before moving forward with the rezoning."
To us, it is plain ole common sense.  Kill the re-zoning!  Don't you agree?
Below is the press release from Voice of Gowanus:

GOWANUS - Over thirty five concerned Gowanus-area residents, representatives from several city-wide civic organizations, and representatives of public officials gathered along the Gowanus Canal at the Carroll Street Bridge this morning to express outrage over the proposed Gowanus rezoning.

“This is New York City! This is the 21st Century! We should not be increasing residential density in areas subject to flooding. There are better, safer, and less expensive places to add the needed housing,” said local resident Glenn Kelly. “The first priority is to bring environmental justice to this community by thoroughly cleaning the toxic poison from the Canal and upland. This cleanup should include planning to prevent combined sewer overflow into the Canal. We should not have an open sewer in an area targeted for development.”

“We need to look closely at the stacked layers of incentives that developers stand to get as part of this rezoning,” said Gowanus resident Debbie Stoller. “While everyone supports affordable housing, should it be at the water’s edge? Is Mandatory Inclusionary Housing the way to achieve this goal? How much will it cost per square foot to create this affordable housing and does it make sense for taxpayers?”

Susannah Pasquantonio, a representative from Assemblymember Jo Anne Simon addressed the crowd, too, reading a statement noting that the Assemblymember heard and understood the concerns of those gathered. Experts were on hand to weigh in as well.

“This is probably the most important community struggle in Brooklyn this century,” said Tom Angotti, a professor of Urban Policy & Planning Professor at Hunter College.

Marlene Donnelly of Friends and Residents of Greater Gowanus spoke of the ongoing need to reclassify the waters of the Gowanus Canal before the area is zoned for more residential. “Right now,” Donnelly noted, “the Clean Water Act’s requirement to limit pathogens in the water is not applicable because this is still deemed an industrial waterway.” Katia Kelly of the blog Pardon Me for Asking reiterated Voice of Gowanus’ call for a moratorium on the rezoning until the Gowanus Canal has been cleaned up, calling it a public safety issue that Council Member Brad Lander has yet to face up to as the process moves forward.

Several of the speakers touched on how the proposed Gowanus rezoning is moving forward after an improved but still fundamentally flawed process. Lynn Ellsworth of Human-Scale NYC said her organization “calls for a moratorium on all upzonings until the conflicts of interest at the Department of City Planning are cleaned out and real estate interests are removed from serving on the Commission.” The Municipal Art Society was on hand as well: “No planner has a crystal ball to tell us exactly what the future will hold, but communities deserve a reasonably accurate picture of what’s ahead,” said Thomas Devaney Senior Director of Land Use & Planning at MAS. “The final scope of work and draft environmental impact statement for the Gowanus rezoning need to tell us much more about the potential impacts that these zoning changes could produce, not just the expected results. From Long Island City to Hudson Yards, we see time and again that these expectations drastically underestimate the development that ultimately occurs.” Gowanus resident Brad Vogel mentioned that “even though many of us gathered here have attended many, many, many planning meetings, we still do not believe the current rezoning plan reflects our input. For one, we did not get concrete answers from the city about how the anticipated development will avoid polluting the Canal with more combined sewer overflow.”

Joseph Alexiou, author of Gowanus: Brooklyn’s Curious Canal, cut to the chase: “We’re up to our necks in poo around here.” His comment referred to the fact that planned infrastructure intended to capture combined sewer overflow (CSO) in tanks or a tunnel is only sufficient to capture CSO loads from the existing neighborhood - not from new development.

Victoria Cambranes, a candidate for the 33rd District of the NYC City Council, attended and spoke of the need to organize, drawing on her experiences in Greenpoint. Linda Mariano, longtime Gowanus resident, pointed to the spot-zoning that has occurred along the Gowanus Canal as a harbinger of what is to come despite the Gowanus neighborhood’s ability to heal itself organically. Triada Samaras of CORD in Carroll Gardens called out the need for consideration of artists given their longtime importance in the Gowanus.

The coalition also acknowledged the presence of Shakti Robbins-Cubas from NYS Senator Velmanette Montgomery’s office, who attended to listen to constituent concerns.

In the end, the Coalition remains concerned that the result many feared during the planning process seems to have come true: limited zoning choices and massive development but little actual planning. The Coalition seeks reform of how land use decisions are made in our communities since it is communities like ours that suffer the consequences, both expected and unintended. The Coalition supports a better process that involves careful planning and sensible development that is not focused on maximizing profit for developers. Until that better process materializes, a moratorium on the current Gowanus rezoning proposal is the only responsible option.

As Glenn Kelly noted in his closing remarks: “If we rush through this rezoning before the Canal is cleaned up, we will have a greater risk of failure. There are too many unanswered questions and unfunded wishes,” Kelly said. “The community is not happy with the 4th avenue zoning, we were all surprised with how the LIC and downtown Brooklyn zonings were built out. These were the best that NYC Planning could do with the tools available to them…but it was only the developers who got what they wanted. If we slow down and plan carefully, we will definitely produce a better result. And don’t we all want a better result?” 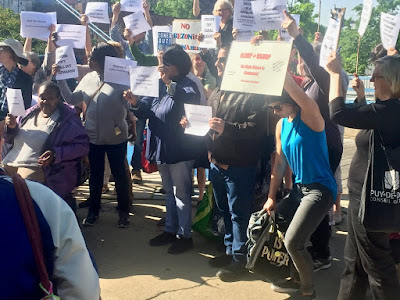 Update....
The media is already reporting on this morning's Voice of Gowanus events.  Please see:

Posted by Triada Samaras at 5:52 PM